0 products in your cart

Before purchasing any product(s) from this site you agree that:
You are taking your health into your own hands;
You have done and will continue to do your own research; and
You do not hold this website or its' affiliates responsible for your health.
I agree I agree I agree
`

NOTICE: You must be 19 or older to order from this website

Chaga Mushroom: This Unusual Tree Fungus is a Medicinal Powerhouse

[Editor’s note] This post was originally published in May 2017. It has been updated and republished in February 2019.

The mysterious Chaga mushroom (Inonotus obliquus) is a non-toxic, medicinal mycelium with a propensity for birch bark. If you were to spot it while roaming through a birch forest in the Northern hemisphere, you’d probably assume (based on its rather unappealing appearance), that it was some kind of tree infection. But Chaga is a whole lot more than just an unsightly forest blemish.

The chaga mushroom is actually a treasure trove of science-backed healing potential that’s been a prominent feature in folk medicine for thousands of years.

Chaga’s reputation as a powerful natural remedy for everything from gastrointestinal disease to tuberculosis to cancer spans at least as far back as the 16th century when botanical artisans are said to have figured out that it could be steeped as a tea for a variety of therapeutic purposes.1

The historical record suggests that, even prior to this, natural healers in Asia were likely among the first to document Chaga’s medicinal potential more than 4,600 years ago. They observed that the strange fungus has a unique ability to extract nutrients from its hosts and concentrate them into itself. Hence the chaga mushroom’s incredible density of B vitamins, antioxidants, trace minerals, enzymes, and more.

Since these ancient times, science has taken our understanding of Chaga to a whole new level, and the West is finally catching on to what this amazing mushroom is capable of. Just in the last century the Chaga mushroom’s antiviral, antimicrobial, anti-inflammatory, cardio-protective, anti-hyperglycemic, and anti-cancer properties have become more widely known.

Prominent authorities including the International Society for Mushroom Science (ISMS) have declared it to be a worthwhile dietary supplement that may be useful as a first-line nutraceutical remedy. This means it’s a functional food that exhibits significant medicinal and/or tonic qualities from which humans can derive benefit.

You probably already know that the primary means by which the human body avoids disease is through the immune system, a complex network of organs, cells, and proteins that actively wards off foreign invaders. Without an immune system, our bodies would quickly succumb to harmful pathogens like bacteria, viruses, parasites, and malignant fungi, leading to serious illness and eventually death.2 This is why it’s critically important to support the immune system with immunomodulatory nutrition like the kind found in Chaga.

A natural Biological Response Modifier (BRM), Chaga mushroom is rich in a class of polysaccharides known as Beta-D-Glucans that help to balance the body’s immune system response, boosting or slowing it as needed for optimal function.

Chaga also possesses key nutrient compounds that give it the ability to activate an array of immune cells, including lymphocytes, macrophages, and natural killer cells. These cells allow the body to suppress the formation of chronic health conditions like autoimmune disease, allergies, and cancer.

The immunomodulatory effects of Chaga appear to extend even further than this, with investigatory research suggesting benefits in the remediation of both food and asthma allergies, atopic dermatitis, inflammation (including autoimmune inflammatory conditions such as rheumatoid arthritis), atherosclerosis, thrombosis, human immunodeficiency virus (HIV), listeriosis, septic shock, and perhaps most prominently, cancer.

While science has yet to uncover every precise mechanism behind how Chaga performs these functions, it’s clear from what’s already been uncovered that Chaga is a powerful potentiating and immune-enhancing “superfood” with vast healing potential.3

Inflammation is No Match for Chaga Mushroom

In addition to Beta-D-Glucans, Chaga mushrooms contain a variety of other polysaccharides that have been scientifically shown to help boost energy levels and promote mental clarity, while protecting the various organs of the body against damaging inflammation. Particularly in the area of cardiovascular health, Chaga exhibits a type of soothing effect that’s been shown to help relax blood vessels and improve blood flow. This in turn delivers more oxygen throughout the body.

Patients suffering from chronic pain, neuropathy, and even diabetes are strong candidates for Chaga’s use in this regard, as the mushroom’s constituents have further been shown to help modulate platelet aggregation.4

Heart disease is another area where Chaga has shown pronounced benefits. It contains high levels of a triterpene substance known as betulinic acid, as well as its precursor betulin, that studies show is a powerful weapon against high cholesterol. Researchers from Jiangnan University in China found that a culture broth containing dry matter of Chaga extract exhibited both anti-hyperglycemic and anti-lipid peroxidative effects, helping to break down damaging LDL (low-density lipoprotein) cholesterol in the bloodstream.5

Chaga’s diverse antioxidant profile is even more impressive, as it bears the highest ORAC score of any known superfood. (ORAC is a measure of antioxidant potency.) According to research compiled by Tufts University, Chaga has three times the antioxidant power of wolfberries (aka goji berries), which is the next strongest known food. One could argue that this makes Chaga the world’s number one source of inflammation-fighting antioxidants.6

Chaga mushroom contains high amounts of Super Oxide Dismutase (SOD), a powerful class of enzymes that contributes to its robust antioxidant defense against oxidation and free radical damage. Chaga’s natural black pigmentation is indicative of its high content of melanin, a polyphenol-rich “super” antioxidant that protects against DNA damage.7 Melanin is the same antioxidant naturally found in human skin that protects against sun damage.

Chaga and Cancer: A Potential Natural Alternative to Drugs and Surgery?

Where Chaga really shines though is in the area of cancer. Dozens of scientific studies (and counting!) suggest that Chaga exhibits strong apoptotic, anti-proliferative, and chemo-protective benefits. Its full spectrum of phytosterols, including lanosterol, inotodiol, ergosterol, and fecosterol, are among the many Chaga constituents that have been shown both in vivo (inside a living organism) and in vitro (in a laboratory model) to directly inhibit the growth and spread of cancer cells.8

In tumor-bearing mice, extracts of Chaga showed significant tumor-suppressive effects, the supplementation of which resulted in an impressive 60 percent reduction in tumor size, on average. The same research found that Chaga helped to increase tumor agglomeration as well as inhibit tumor vascularization, further inhibiting the growth and spread of cancer in these mice.9 Related research demonstrated Chaga’s anti-cancer potential as it pertains to the down-regulation of certain cell pathways associated with cancer, including in colitis-induced human colorectal cancer. 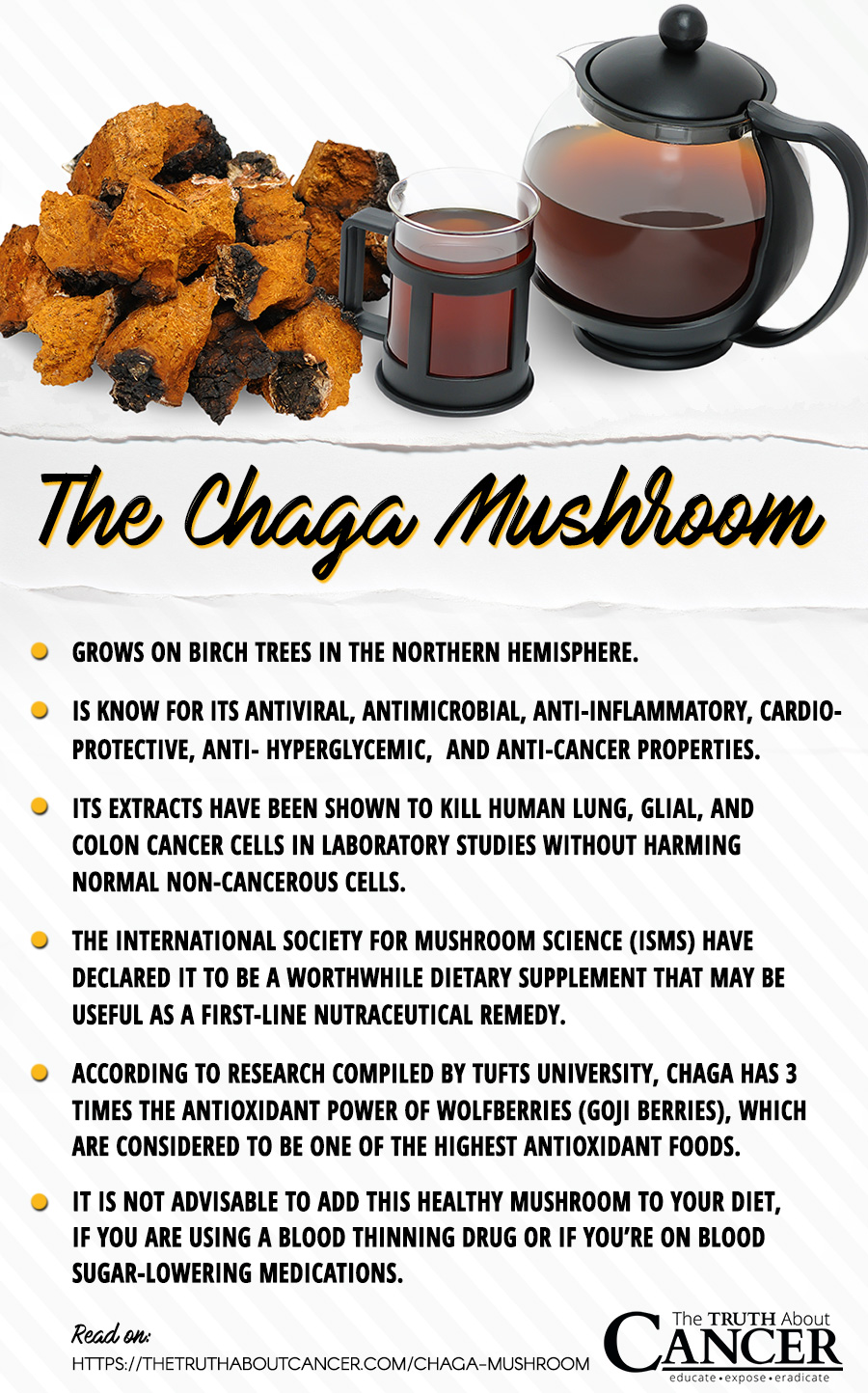 Researchers from Russia have been actively studying the benefits of Chaga and other similar mushrooms that grow throughout their country and in nearby Siberia, taking a particular interest in how these mushroom constituents affect cancer. Among their discoveries are the therapeutic benefits of Chaga’s bioactive triterpene compounds – primarily those containing OH group at C-22 and a side chain unsaturated bond – which these researchers found have the ability to directly inhibit the growth of a number of cancer cell lines, as demonstrated both in vitro and in vivo.11

Chaga also possesses hepatoprotective properties that are particularly relevant not only to liver injuries but also to liver cancer. Studies have found that even when taken at relatively low doses, Chaga actively scavenges the free radicals that cause oxidative liver injury, effectively blocking the formation of liver disease and liver cancer.12

All of this and more is why one study dubbed Chaga as a premier “natural anti-cancer ingredient in food,”suggesting that it may, in fact, be a safe and effective treatment and preventative protocol for cancer.13

This sentiment is further reflected by David Winston, RH, AHG, Dean of the Center for Herbal Studies in Broadway, New Jersey, and an herbal practitioner with more than 40 years of experience under his belt, who’s convinced that Chaga is the most powerfully anti-cancer medicinal mushroom in existence.14

It all makes sense when you consider the incredible nutrient profile of Chaga, which is virtually unmatched in the natural world. Even with all that we know it can do, there’s still so much more to learn about the wonders of the Chaga mushroom, which is why this powerful superfood will continue to be the focus of scientific research involving functional foods for many years to come. 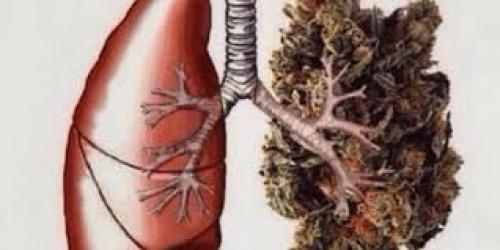 THC and Your Lungs